Get on Amazon Tempering Machines 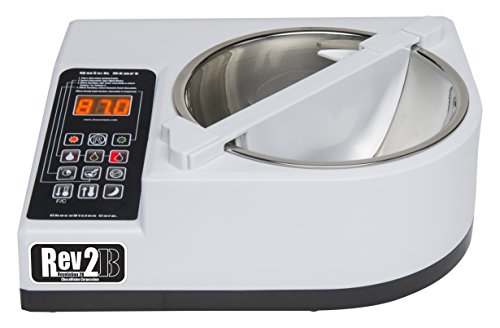 The final process for preparing chocolate is called tempering. Uncontrolled crystallization of cocoa butter typically results in crystals of varying size, some or all large enough to be clearly seen with the naked eye. This causes the surface of the chocolate to appear mottled and matte, and causes the chocolate to crumble rather than snap when broken. The uniform sheen and crisp bite of properly processed chocolate are the result of consistently small cocoa butter crystals produced by the tempering process.

The fats in cocoa butter can crystallize in six different forms (polymorphous crystallization). The primary purpose of tempering is to assure that only the best form is present. The six different crystal forms have different properties.

The temperature in which the crystals obtain enough energy to break apart from their rigid conformation would depend on the milk fat content in the chocolate and the shape of the fat molecules, as well as the form of the cocoa butter fat. Chocolate with a higher fat content will melt at a lower temperature.

Making chocolate considered “good” is about forming as many type V crystals as possible. This provides the best appearance and texture and creates the most stable crystals, so the texture and appearance will not degrade over time. To accomplish this, the temperature is carefully manipulated during the crystallization.

Two classic ways of manually tempering chocolate are:
Working the molten chocolate on a heat-absorbing surface, such as a stone slab, until thickening indicates the presence of sufficient crystal “seeds”; the chocolate is then gently warmed to working temperature.

Chocolate tempering machines (or temperers) with computer controls can be used for producing consistently tempered chocolate. In particular, continuous tempering machines are used in large volume applications. Various methods and apparatuses for continuous flow tempering have been described by Aasted, Sollich and Buhler, three manufacturers of commercial chocolate equipment, with a focus now on energy efficiency. In general, molten chocolate coming in at 40–50 °C is cooled in heat exchangers to crystallization temperates of about 26–30 °C, passed through a tempering column consisting of spinning plates to induce shear, then warmed slightly to re-melt undesirable crystal formations.